The trafficking and exploitation of Nigerian women within channels of irregular migration to the EU continues relatively unabated and is having a devastating effect on survivors. The vast majority of Nigerian women in prostitution in Italy, as an example, are considered to be victims of trafficking (IOM, 2006).[1] The recent U.S. Department of State TIP report also cited how vast the phenomenon of Nigerian trafficking is, as survivors were identified in many diverse locations; 34 countries in 4 different regions of the world.[2]

A former Nigerian Permanent Representative to the United Nations (Mr. Martin Uhomoibhi) stated that in 2016 alone, 602,000 Nigerians endeavored to migrate to Europe through the Sahara Desert with 27,000 dying on the initial journey[3]. Even though European estimates of those who actually arrived within the EU in 2016 were much lower, Mr. Uhomoibhi’s statement demonstrates the widespread nature of the problem and how influential the migratorial interest is in the process of exploitation.

Many of these women who eventually find themselves in forced prostitution within the EU began their journey by entering into an emigration pact with a sponsor (often referred to as the madam), to whom they have also obliged themselves to pay back. The initial costs of getting to Europe are often drastically increased to a price between $40,000 to $100,000. This practice places the victims within a form of debt bondage.[4]

Nigerian women who have been trafficked and forced into prostitution in the EU share common traumatic experiences with survivors coming from other countries. There is, however, a particularly beguiling element to Nigerian sex trafficking - the use of juju rituals as a tool to mentally enslave their victims. This form of control has been especially challenging to navigate for law enforcement, NGO´s, and other state actors within Europe since the controlling factors are built upon unfamiliar beliefs and practices. A major contributor to common misunderstandings is the sensationalization by the European media which has often created caricatures of the problem.[5] Any work looking to assist Nigerian survivors of trafficking in the integration process must seek to move beyond these unhelpful stereotypes and to help others in Europe also move beyond.

What is a Juju Oath?

The concept of the juju oath within trafficking, especially as practiced in Edo (the primary source location of Nigerian trafficking survivors) exists as a part of a native justice system. The term native justice describes a justice system built on the belief that certain deities within the Edo traditional religion have the power to adjudicate between two parties. This system of justice has continued to be utilized for criminal and civil cases alongside of an official justice system (courts, police, etc). In cases of trafficking, the women who pledge to repay the madam are required to make this pledge in the form of an oath before a particular deity.

The juju priest, a priest serving within the temple of a particular deity invokes a ritual act in order to utilize the power of the deity to enforce the promise that was made. For this reason, the oath made by the women functions as a conditional self-curse. The expectation is that the power of the deity will be unleashed upon the women (according to the priest´s direction) if she does not hold to the promise which she made. The ritual itself is calculated to disorient, cross over the boundaries of a person’s dignity, and above all, instill fear. This ritual involves the collection of items from the woman, the slaughtering of an animal, and the solemn vow to repay the debt owed for being transported to Europe. Above all, the women are also made to swear that they will not speak of their arrangement to anyone.[6] 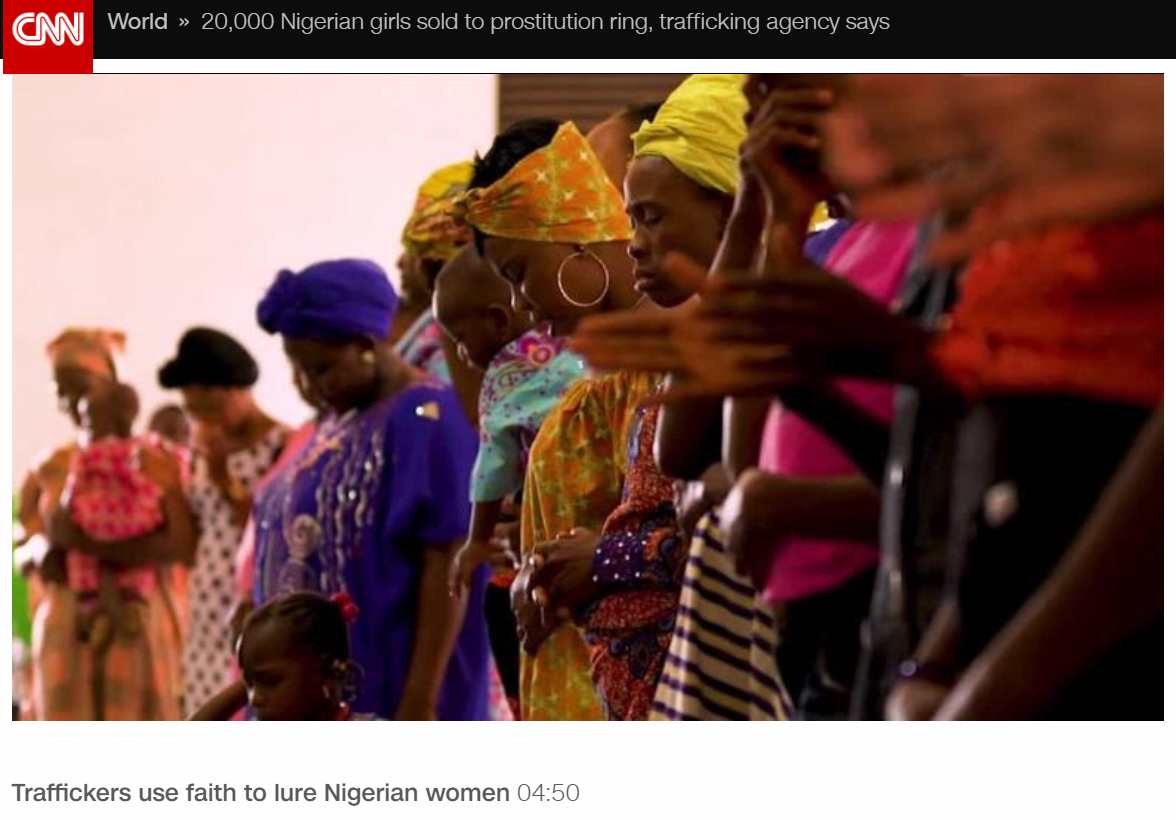