The European Commission states that human trafficking has a “detrimental effect on individuals, society, and the economy” and is a “gross violation of fundamental rights, and is explicitly prohibited under the Charter of Fundamental Rights of the European Union”.[1]

The result is two separate reports and two manuals with recommendations for practical work with both groups of trafficked persons.

[1] European Commission. 2016. “Report from the Commission to the European Parliament and the Council – Report on the Progress Made in the Fight against Trafficking in Human Beings (2016).” COM(2016) 267 Final. Brussles.

The qualitative study was conducted on 35 Nigerian Survivors, 18 experts and 2 focus groups. The data was collected by a semi-structured qualitative interview with questions on different aspects of integration and was transcribed and analysed using the MAXQDA software.

Key findings of this study are the role of a Person of Trust as the biggest opportunity and the role of fear as biggest hindrance for survivors’ integration. Further implications are the need for more state funding for gender-specific and mother-child friendly safe housing and SoT-specialised social workers and NGOs. Asylum policies need to be adjusted in order to refrain from deporting SoTs. Along with this, the EU Member States should release more funds for anti-racism and other Social Impact Projects in order to counteract refugee hostility in society. 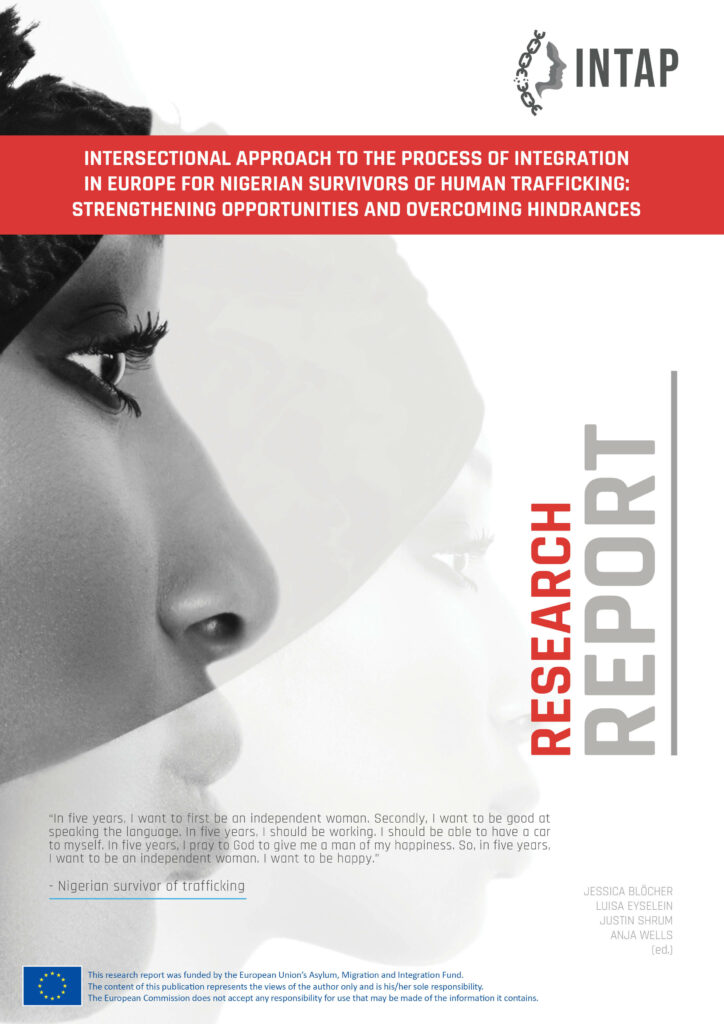 A brief guide to the contents of the report:

Chapter 2 provides the context of the study and presents the state of research. Readers interested in the methodological approach can go to Chapter 3. Readers who are most interested in specific topics within integration (e.g. health care system, housing, etc.) can go to Chapter 4 with the specific code summaries. Practitioners (e.g. social workers, volunteers, etc.) whose focus is on practical implications can go directly to Chapter 5.2 and 5.3.

This handbook gives Nigerian SoT as well as experts a voice, as they raised recommendations based on their experience, giving ideas on how to offer tailored assistance to the specific needs of each individual SoT. Although this handbook focuses on the case study of Nigerian SoT, the best practices can be used in conjunction with already existing integration programmes. This handbook showcases tools of how to offer a culturally-sensitive (including spirituallysensitive) and gender-specific intersectional
approach for the integration of Nigerian SoT in a victim-centred manner. The purpose of this handbook is, therefore, threefold:

As human trafficking occurs globally and refugee movements are a matter of international concern, this handbook can also be used by practitioners beyond the EU, who are confronted with similar challenges, as a learning resource for background theoretical and practical information. We hope that this handbook will give you a better understanding of integrational challenges facing Nigerian SoT and help you to develop new skills as well as motivation to assist these women. 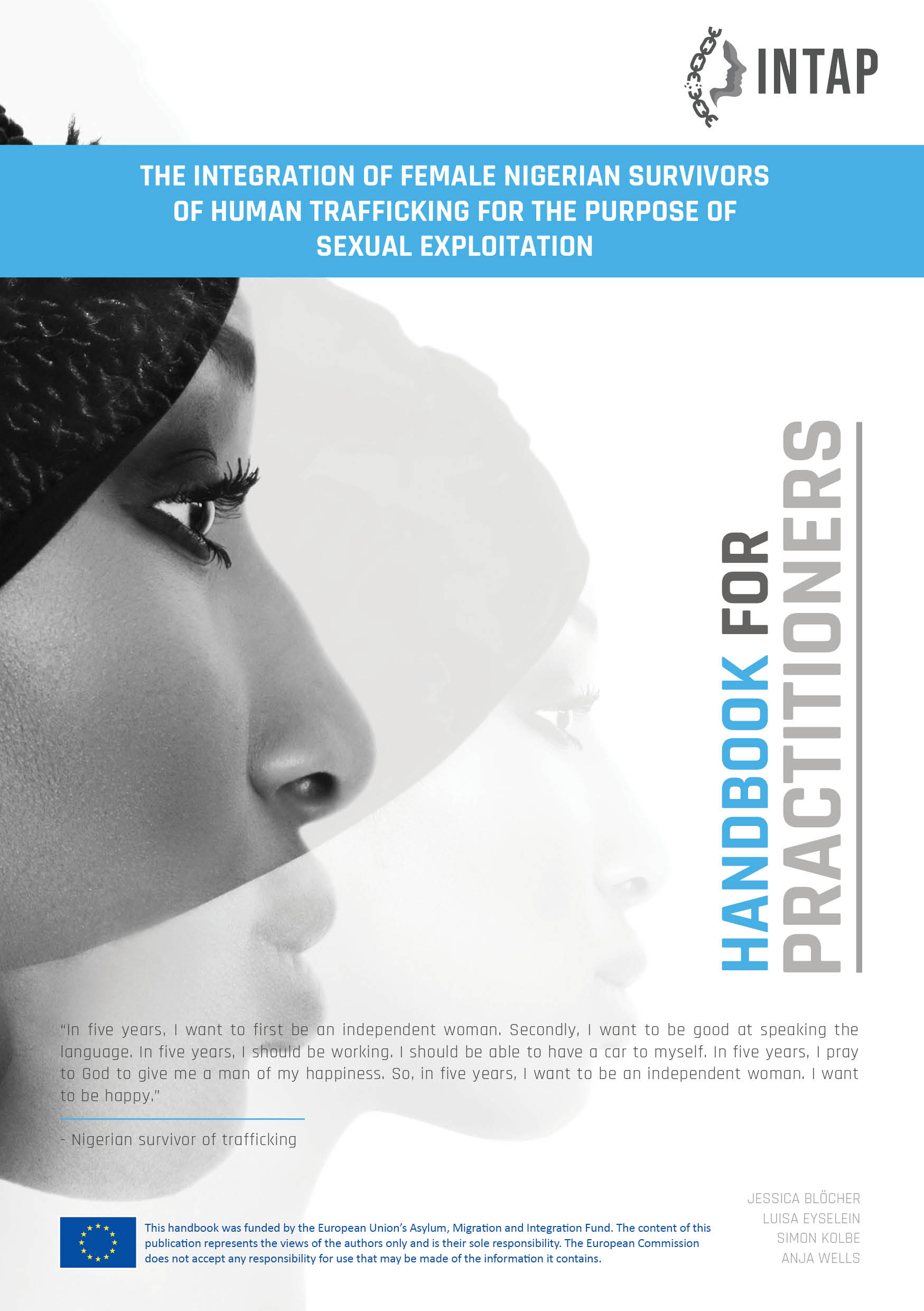 A brief guide to the contents of the handbook:

After briefly describing the aim of this handbook in this subchapter and some facts on Nigerian human trafficking in Chapter 2, Chapter 3 explains the importance of a Person of Trust in the integration process of Nigerian SoT. Chapter 4 showcases what competencies are needed for a Person of Trust to support the integration of Nigerian SoT successfully. Chapter 5 describes the main intersections that are relevant for integrating Nigerian SoT in EU host societies. This chapter contains several theme pages, in which the main results of the research paper are discussed as well as best practices and proposals for action for the given intersections are outlined. Chapter 6 summarises the main recommendations concluded from the findings of the INTAP project.

According to the data collection on trafficking in human beings in the EU (European Commission 2018), Chinese women and girls made up the third largest group of registered third-country national victims of human trafficking in the EU between 2010 and 2016. Human trafficking from East Asia traditionally involved mainly Thai women, but all of a sudden began involving an increasing number of Chinese nationals who are being exploited primarily in indoor prostitution, such as massage parlours, saunas or beauty centres (UNODC 2010).

Still, there is very little research regarding Chinese victims of human trafficking in Europe and still a lot more to find out about their specific circumstances.

The research report aims at doing exactly that: Firstly, to provide more information about how human trafficking of Chinese women to Europe actually works, and what the specific challenges are for the survivors. Secondly, to discover how to best facilitate their process of integration into the European host country society. 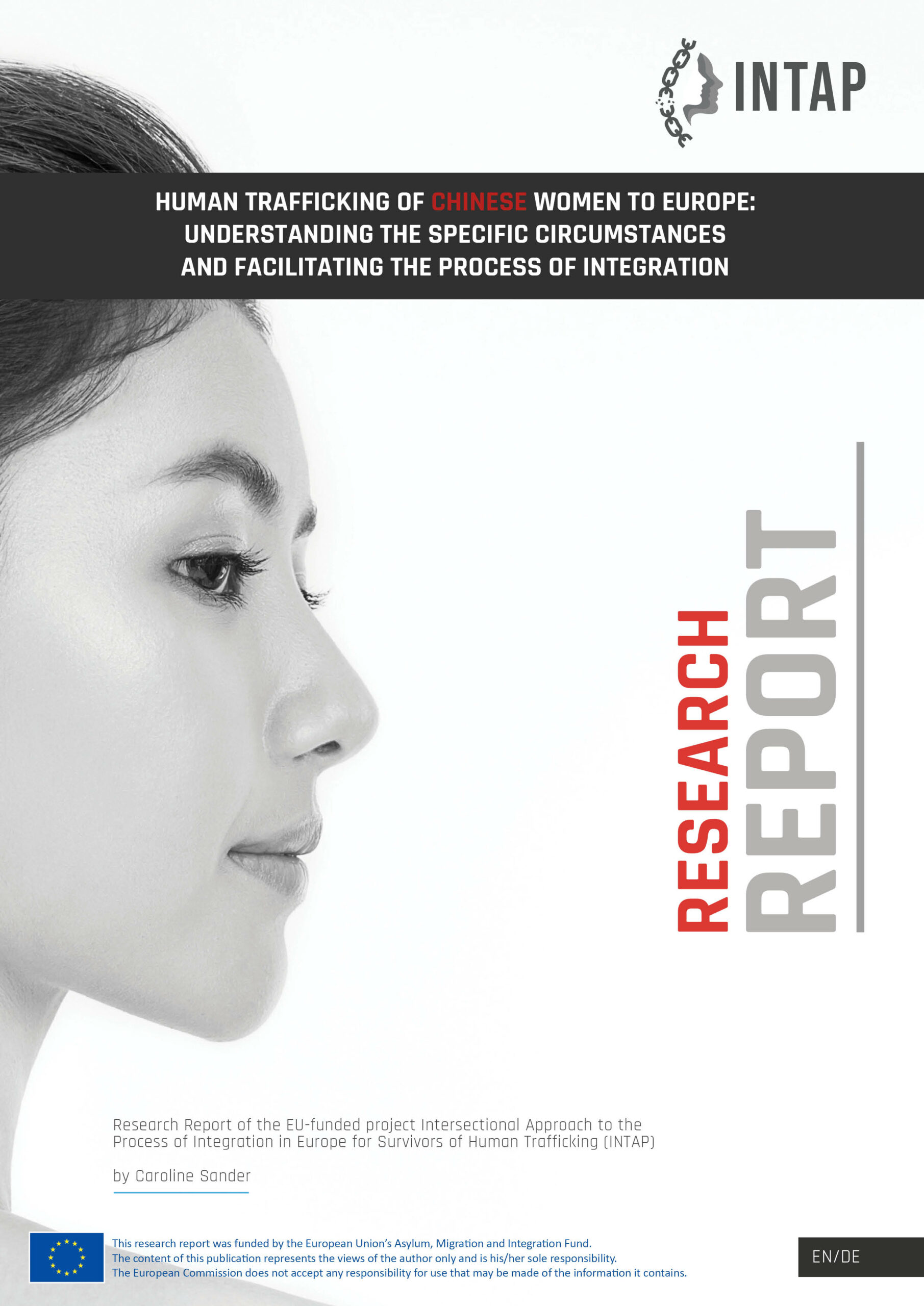 The research started with a literature review and continued with qualitative interviews conducted with SoTs on the one hand, and relevant authorities, specialised NGOs and Chinese culture and language experts on the other hand.

Apart from aspects such as language, access to the labour market, residency issues, or Chinese community, two particularly prominent elements of this research turned out to be the positive influence of a so-called person of trust, and the negative influence of fear and shame – the latter as an intrinsic element of Chinese culture.